Anglesey council’s new waste collection scheme hit national headlines this week following news that its nappy collection required parents to provide a birth certificate to prove children were under the age of three. 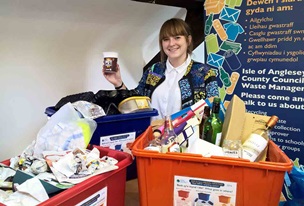 The nappy collection scheme is being introduced alongside changes to the waste collection service from October 2016.

The Welsh local authority has explained to letsrecycle.com what the rules of the new service are and how they have been amended since the criticisms were aired in national media.

“The big picture here is a change in the collection service from a fortnightly residual to a three weekly residual, that’s the trigger if you like,” Mr Edwards said.

While nappies can still go into black bins, Mr Edwards said “it was recognised that even with taking the mixed plastics out of the black bin we would need to help certain people who have additional waste, families in particular.”

Once collected, nappies go in with the general waste and are either sent to landfill or treated at a waste incineration plant, Mr Edwards said, but “moving forward they will all be treated.”

On the birth certificate controversy, Mr Edwards explained: “We did some research into the average age that kids come off nappies, using NHS data, which says that most children are out of nappies between the ages of two and three. We went for the upper limit, three years old.”

“The controversy was around needing a birth certificate and about the age limit,” Mr Edwards said. “As of yesterday the policy’s been changed to four [years old].”

As for asking for a birth certificate, Mr Edwards commented that it “was found not to be the right thing, and we are not asking for it anymore, but we are asking the eligible family to provide evidence of their children’s age in writing.”

New application forms are available to reflect the new age limit and scrapping of the need for a birth certificate.

“It is worth mentioning that anyone over four will be looked at on a case-by-case basis,” Mr Edwards said, explaining this is to allow for factors such as medical conditions. There is also an adult nappy collection for those who need it.

However, Anglesey is not the only council in Wales to introduce a nappy collection service. Other authorities, including Gwynedd and Conwy, offer nappy services, Mr Edwards noted.

“We were looking at what other authorities were doing,” he said, adding that some councils in Wales also ask for a birth certificate but Anglesey ended up in the public eye.

“There aren’t that many councils that offer a standalone [nappy] service,” he said. “It’s mainly those that have gone three-weekly – and there are only a handful – who have recognised that young families will need help.”

The new recycling service is scheduled to begin in October, moving to a three-weekly residual black bin collection and revamped recycling system.

The island’s 34,000 households will begin receiving their new orange box this week, for sorting glass and mixed cardboard, and can start recycling using the new system as soon as their box arrives. 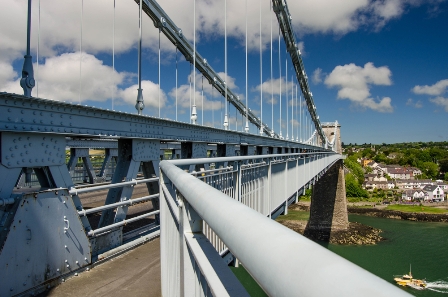 Looking from the Menai bridge to Anglesey (picture: Shutterstock)

A red box holds paper and textiles, while a blue box is for mixed plastics, tins and cans. All boxes are collected weekly as well as a weekly food waste collection. Garden waste collection remains fortnightly.

The waste collection service is outsourced to Biffa. Two additional recycling vehicles will be added to the fleet to facilitate the new service.

Surgeries are being held to help inform residents of the new service. Bethan Jones, senior waste promotions officer, said: “The surgeries proved really popular with lots of people attending to ask about all aspects of the new service and make sure they knew what new items could be recycled and which box to put them in.

“We were pleased that so many residents are keen to use the new system and are pleased to have the opportunity to recycle many more items, particularly more plastic. Lots of residents were also pleased that the green waste collection service is continuing throughout the year.”

In addition to information packs sent to households and drop in surgeries, the council’s waste management promotional team will also be out and about across the island visiting homes and helping residents with the new service once it begins.